Originally posted on my blog on April 27th 2010

iTunes Canada had it at a decent time tonight

I still think that removing the belt from A.J. Styles was a mistake. A big, big, big, big mistake. You were setting up to give it to Abyss were you not? Then you swerve and hand it to RVD ? What the freal for? Mistake! Styles could have handled holding that title for at lest another 5 months before it got tired. The logical step would have been to have him go against Abyss or even Eric Young for it, but noooooo you had to go and screw it up. No cookies for the crew. None. 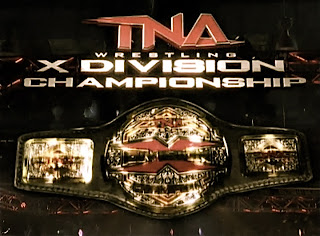 Knock Outs match... Love vs Tara vs Rayne... Rayne won with a roll up and keeps her title.

Shannon Moore vs Kaz. And the story here is, that Kaz won the Lockdown ppv last week, but the championship belt is still in the possession of former champ Doug Williams who is still stuck in Europe because of the volcanic ash. For anyone who might have been wondering why Kaz came out without the belt. They started with a collar tie up that was quickly turned into an armlock by Moore. Kaz countered by tossing Moore over, then used a deep armdrag before following it with a scoop slam. He missed with the elbow though as Moore rolled out of the way. Moore then delivered two arm drags and a scoop slam of his own on Kaz. Another collar tie up,which Kaz turned into a side headlock on Moore. Moore fought out getting Kaz in a scissors flip. This was followed with an inverted atomic drop and a double leg take down, Kaz on the mat. Moore used a leg drop but only got a two count. Kaz in the corner, as Moore came charging at him, but he moved out of the way using the rope as a slide. Kaz from outside slingshot into the ring with an armdrag on Moore. Kaz backed this with a spinning neck breaker but only got a two count. Moore got to his feet and went to the apron for a inside sunset flip but was caught by Kaz. Kaz was going for a reversed piledriver but Moore countered and was thrown into the ref. Moore was going for a top rope move, but Kaz delivered a sharp kick to the side of the skull. Kaz then went for a top rope hurricanrana but it was blocked by Moore who then went for a top rope move himself. It was ruined by Matt Morgan the evil druid as he ran out pushing Moore to the ground. Morgan the evil druid then pushed Moore back into the ring, and Kaz used his reversed piledriver for the win. Kaz is still the X-Division champ. Samoa Joe then came down after the match for a five minute beat down on Kaz. And the muscle buster will get a large pop no matter who is on the other end of it cause it's such a Beauty of a move.

A.J. Styles/Sting vs Jeff Jarrett/Hardy.... Now, you know how I feel about Sting and Hardy so... that don't impress me much. This was a falls count anywhere no dq match. Jarrett and Sting in the ring, Styles and Hardy on the ramp. (dude that sounds so wrong) Oh damn! Styles got suplexed on the ramp hard. But it was only a two count. I've said this a million times, I am not a fan of hardcore/street fight matches at all. I don't understand why the guys would want to do those type of matches I really don't.
I do however, like the fact they are scrolling injury reports on the screen. Sting pinned Jarrett for the win on the stairs.

Team 3D vs Matt Morgan the evil druid/Jessie Neal. Neal and Devon started with a collar tie up. Devon turned it into a side head lock, then slammed Neal with a hard shoulder block knocking him down. Neal walked right into another side headlock before Brother Ray tagged in with a wicked sounding slap to Neal. Brother Ray followed up with a bear hug. Nash and Hall then came to the ring ruining the match. I think run ins work much better when you do NOT play the music. When you don't know who is coming till they are in the camera's view

Flair vs Abyss. They started with a collar tie up, Flair getting tossed across the ring. Flair started to kick Abyss then went for his trademark chops. Abyss turned it around, getting Flair into the corner with a series of punches. Followed it up with a back body drop on Flair. another round of chops from Flair now outside of the ring. Abyss put Flair face first into the rails. Back in the ring and Flair used a thumb to the eye,then was heading for a top rope move, but Abyss caught him slamming him down hard in the middle of the ring. Big boot from Abyss knocking Flair down. A hard side slam from Abyss followed that, before a large splash in the corner from Abyss. Flair did his trademark falling flouso on his face and eyes. Lowblow takes the ref down. Hahaha Then Flair used the brass knuckles as a lowblow. Dude! damn. Flair gets the win. The ref saw the brass knuckles and restarted the match. Flair went right for Abyss with a kick to the face, a series of punches and chops. Abyss shook it off before Abyss used his blackhole slam for the win.
WHERE THE HELL WERE THE MOTORCITYMACHINE GUNS!
Posted by ardeth blood at 10:06 PM

Photo of the Week

What would you like to see us add to the blog?

We have been nominated.

To check out Andrew and the Aluminumsidings for my continued weekly Thoughts on TNA Impact as well as my other social commentary on the X-Division.
Previous post are located there.

Results of Past Polls

The results for past polls can be found here